What you will find in the box

For graphical performance that can make games run smoothly, this phone has got a Mali-G71 MP2 GPU. On board storage is at 32GB with the option to expand the memory by Yes Up to 512 GB. Design is one of the most important factors when it comes to mobiles. This phone is 7.9mm slim and weighs 166 grams. 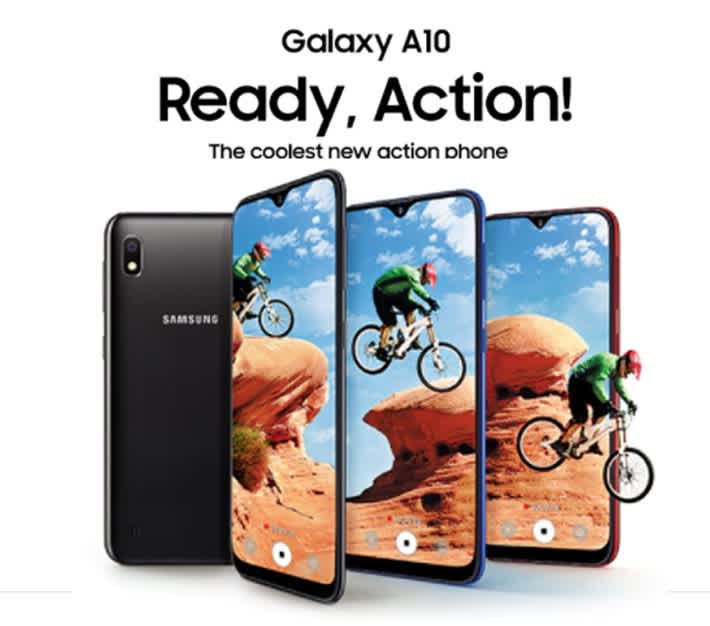 The new Galaxy A-series models feature Super AMOLED display panels along with attractive camera sensors. There  is also Android Pie out-of-the-box along with Samsung's One UI on top. Samsung notably unveiled the Galaxy A10 for the global markets earlier this year and showcased them at Mobile World Congress (MWC) 2019

In terms of optics, the Galaxy A10 has a rear camera setup that includes a 13-megapixel sensor along with an auto-focus f/1.9 lens, a 5-megapixel sensor. There is also a 5-megapixel sensor with a fixed-f/2.0 lens at the front. Furthermore, the handset comes preloaded with Samsung's Intelligent Scene Optimizer that is touted to adjust the colour, contrast, and brightness after categorizing the subject. With the Samsung A-Series(A10) you are good to go.

For the imaging needs, Samsung has added a single 13-megapixel shooter on the back with an f/1.9 lens and a 5-megapixel camera on the front with an f/2.0 lens. Use your device wherever you desire to.

Order Your Samsung Galaxy A10 today on www.Onitshamarket.com  at the best price and fast delivery.

This is a confirmation that the product Samsung Galaxy A10 6.2-Inch (2GB RAM, 32GB ROM) Android 9.0,13MP Rear Camera + 5MP Front, 4G LTE Smartphone has been added to your cart